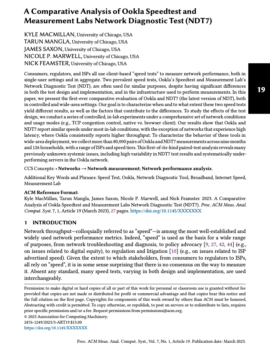 Consumers, regulators, and ISPs all use client-based “speed tests” to measure network performance, both in single-user settings and in aggregate. Two prevalent speed tests, Ookla’s Speedtest and Measurement Lab’s Network Diagnostic Test (NDT), are often used for similar purposes, despite having significant differences in both the test design and implementation, and in the infrastructure used to perform measurements. In this paper, we present the first-ever comparative evaluation of Ookla and NDT7 (the latest version of NDT), both in controlled and wide-area settings. Our goal is to characterize when and to what extent these two speed tests yield different results, as well as the factors that contribute to the differences. To study the effects of the test design, we conduct a series of controlled, in-lab experiments under a comprehensive set of network conditions and usage modes (e.g., TCP congestion control, native vs. browser client). Our results show that Ookla and NDT7 report similar speeds under most in-lab conditions, with the exception of networks that experience high latency, where Ookla consistently reports higher throughput. To characterize the behavior of these tools in wide-area deployment, we collect more than 80,000 pairs of Ookla and NDT7 measurements across nine months and 126 households, with a range of ISPs and speed tiers. This first-of-its-kind paired-test analysis reveals many previously unknown systemic issues, including high variability in NDT7 test results and systematically under- performing servers in the Ookla network.

What Can We Learn from Selected, Unmatched Data: Measuring Internet Inequity in Chicago

By integrating a “big” dataset of Speedtest Intelligence from Ookla that measures Internet performance and income data from the American...
Publication

Speed testing methods have flourished over the last decade, but none without at least some limitations